In my last post I had written about my Journey upto Tawang via the magical Sela Pass. After a long drive we finally managed to reach Tawang. It was cold and raining. We checked in our hotel and went out for a stroll. The life in hill stations generally comes to a standstill after the sun sets. Though there surely was a little buzz about the Tawang Festival that was going to start the next day. We got into our cozy room and dozed off as we were extremely tired after a day long journey.

Next morning was the first day of festival. Woke up in the morning and peeped out of my window to a beautiful view.

There were lot of activities happening on the street. People cleaning their shops, decorating them with flowers and flags and security forces getting instructions and much more.

We had our breakfast and first thing we decided to do was, to visit Asia's second largest monastery, The Tawang Monastery. We hired a taxi and we reached at the right moment. The monks at the monastery were singing prayers, and were heading to the festival ground. It was a beautiful sight.  We decided not to follow them and rather explore the monastery. It was serene. One could feel the calmness and a sense of contentment. I kept watching the monks, especially the little ones moving around the monastery. One could spend the whole day just staring at them. But we had little time. The Buddha statue inside the monastery is absolutely divine and there was light falling on the face of Buddha from one side, which made it look mystical.


We headed back to the festival ground. Participants were practicing for the procession that was going to take place later in the afternoon. Dancers were busy in getting their movements right for the Aji Lamu Dance, a traditional form of dance of Monpa Tribe of Arunachal Pradesh. Others were busy clicking pictures. We moved to the main town, where the procession was to take place. It was great to see the enthusiasm of the locals and as well as the visitors. Everyone had lined up on both the sides of the street to cheer the dancers and the other participants. Such wholehearted participation of the citizens is surely motivating for the performers. 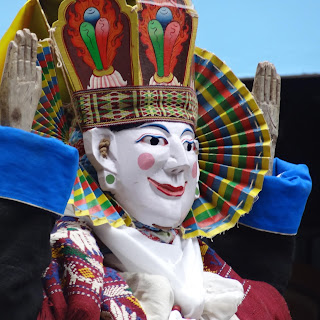 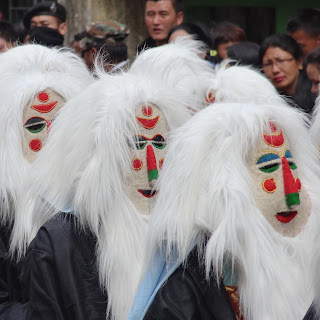 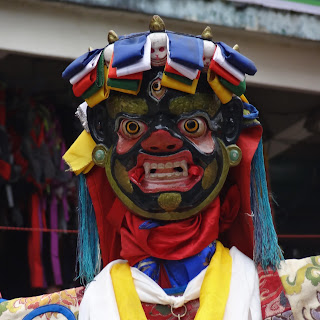 In the evening we went to the festival ground to see the performances. Unfortunately it was raining, raining and raining. The whole venue was messy and one couldn't even walk. But thanks to our gum boots that we managed to walk around. Rain gods were not going to show any pity. I took out my umbrella and was holding it for at least 3-4 hours to watch the performances. My back and legs were hurting now and decided to head back and sleep as we had much more planned for the next day.


Next morning, we decided to go to Madhuri Lake, popular name for Shungatser Lake. The lake got its popular name after a part of Bollywood movie Koyla (starring Shah Rukh Khan and Madhuri Dixit) was shot here. I must tell you hiring taxi in Tawang is a pretty expensive affair. So be ready to shell out some cash especially during festival time and tourist season. We took a taxi and left for Madhuri Lake. On our way we were stopped by the army. We were not the only ones; all the vehicles going in that direction were stopped. The army was not ready to open the entry gates as Defence Minister was suppose to arrive in sometime at the festival ground. Everyone was getting really impatient and super irritated. Most of us were tourists, with limited time in hand wanted to continue with our journey. But army was adamant. After a lot of requests and begging from almost everyone, they decided to open the gates, but only after each taxi driver entered the car and passenger details in the visitor's register. It was quite annoying as we lost almost 2 hours. In between we actually went back half way, but came back because heart was not ready to accept this.

On the way to Madhuri Lake is the P-Tso lake (Pangateng Tso Lake). It's a beauty. Its located at a distance of around 10 kms from the Town of Tawang. We also saw many bunkers that were built during 1962 Sino-Indian War.

Most of the journey from Tawang Town to Madhuri Lake was covered with snow. Roads are quite bad, but the view of the snow covered mountains, and numerous little lakes on the way made us forget everything. It was just perfect. One would never want to go back. We finally reached Madhuri Lake and it was breathtaking. The strong winds and chimes making a wonderful music made it a perfect setting. We got over bored with clicking pictures. The place is so awe-inspiring, that you want to click everything. EVERYTHING.


On our way back we stopped again at P-Tso lake and were offered free boat ride by the army. It was especially arranged for the tourists visiting during the festival time. I also tried my hands on making a snowman. It was a disastrous attempt.


We reached Tawang Town and went directly to Manjushree Orphanage. One can sponsor a child at this school. We were shown around by a student named Deki and interacted with few kids. It was great to see them smiling.

We spent rest of the evening at the Tawang Festival watching the cultural events and waiting for Bollywood Actor Arjun Rampal to arrive. During the festival he was declared the Brand Ambassador of Arunachal Tourism.

Thats it from Tawang. It was an absolute mesmerizing trip. This trip made me realize that no beauty can be better than nature's beauty. Period.
Posted by Aur Batao at 11/14/2015 05:43:00 PM